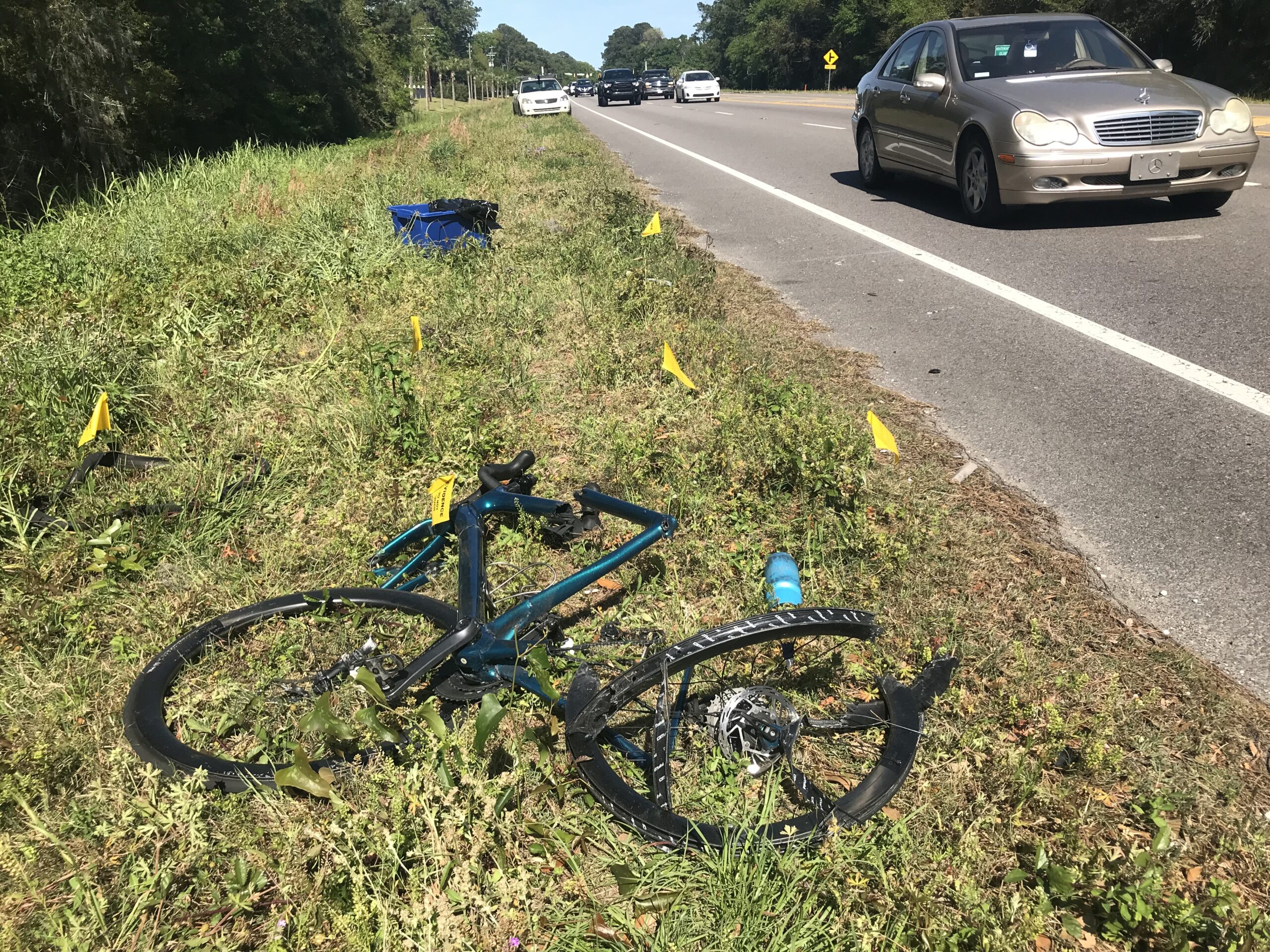 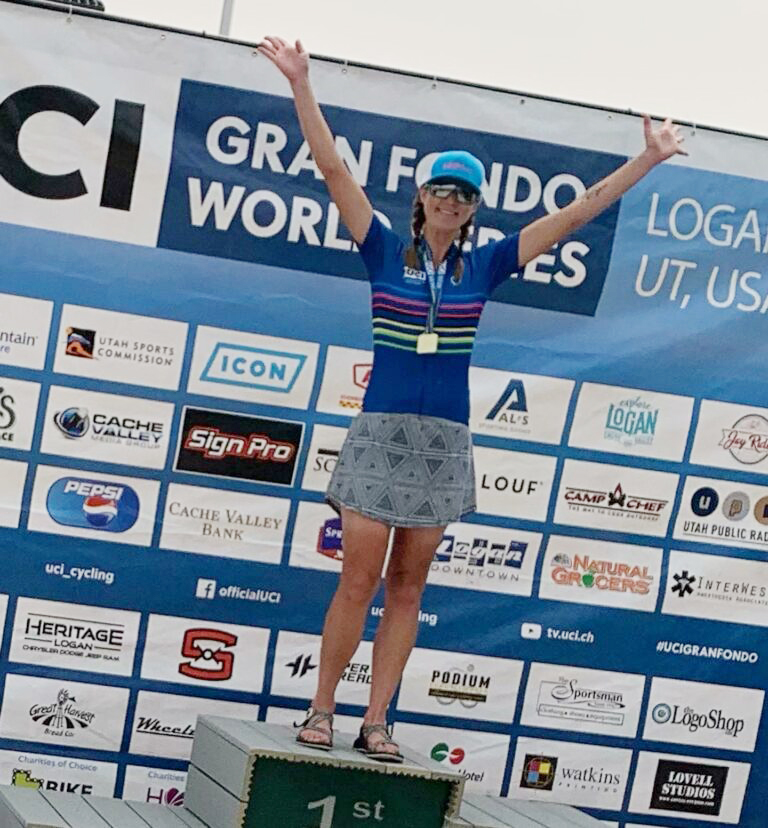 I moved to Savannah at the end of 2014 from Columbia, SC. I left a city with a small cyclocross scene and moved somewhere with an even smaller one. It was easy to feel isolated when I was riding my bike with the skinny tires and curly handlebars in the woods.

I was taking a break during a ride one afternoon in the big grass field at the Whitemarsh Island Nature Preserve trail in Savannah. It’s the trail behind the YMCA on Johnny Mercer Blvd., not far from the intersection with Highway 80. Another bike with curly handlebars and skinny tires came rolling out of the woods. This was a few short years before the gravel bike boom, another bike like this wasn’t the most common sighting.

I had known Jackson Evans just through occasional group rides around Savannah. Every now and then, he would pop up at a local road race or Wednesday night ride, but his work schedule prevented him from riding too often. As a professional jazz guitarist, Jackson’s work started around the same time most people’s days ended. His ride schedule didn’t match up with everyone else’s. As a graduate student, I wasn’t bound to a nine to five schedule. It was easy for us to ride together during the day.

We exchanged phone numbers in the field that day to coordinate some rides together. Since the Georgia Cyclocross Series events happened on Sunday afternoons, he could usually get to those races after playing a Saturday night gig and a slightly abbreviated sleep schedule. Within a few years, we were regular travel and training partners.

We became fast friends after all of that time on the saddle and in the car together. We had nearly the complete opposite taste in music. The absence of song in the car to break the silence meant a lot of silly conversations on Interstate 16 heading northwest. It’s easy to grow close to someone in that environment. 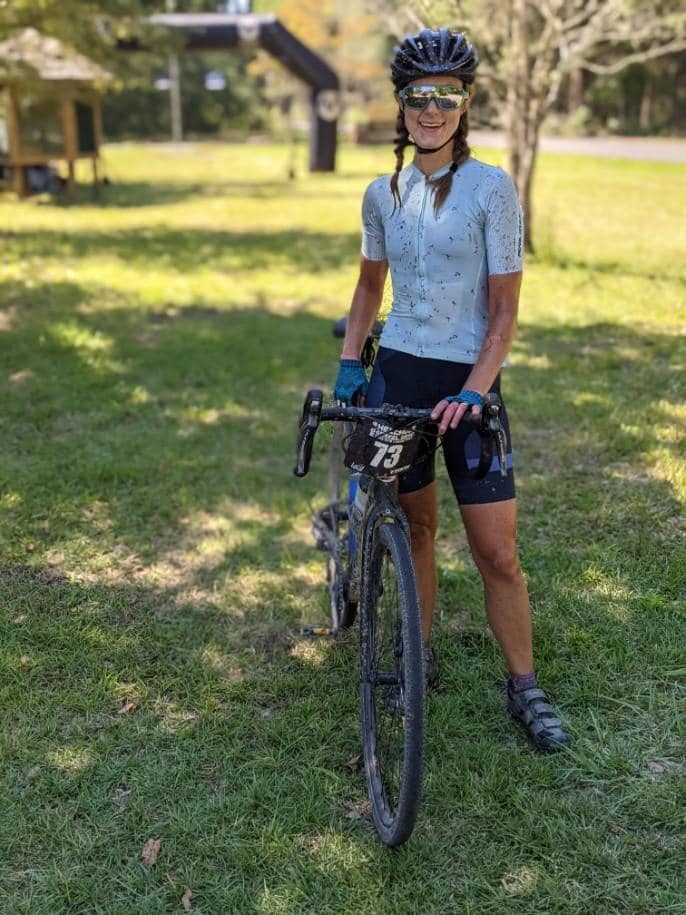 Of course, it’s easy to grow close to someone’s family like that too.

Where there’s Jackson, there’s Maggie. Maggie was a runner when I first became friends with them. When I would show up to their house for a coffee before a local race or training ride, Maggie was usually getting ready to go for a run. Those quick conversations around the coffee table turned into real friendship. I rushed home from a mountain bike race in 2019 to make sure I got to the Evans family holiday party in time. Maggie had arranged to have a birthday cake for me at their holiday party, letting me take the spotlight from their own event for a brief period of time. I’ll never forget her “31 is tons of fun” mantra that she repeated throughout the evening.

I only knew Maggie the runner for a few years. I usually teased her for her sport of choice. She commuted by bike to her job at SCAD, so clearly she understood how great bikes were. She just hadn’t embraced them as a recreational activity quite yet.

When Maggie got her first gravel bike, it was clear that she was hooked. She practically quit running overnight and became a cyclist. Jackson and Justin car trips became Jackson, Maggie, and Justin car trips to explore new dirt roads and sometimes new taco shops. We raced in Hillsboro, GA and rushed home so that they could play their Saturday night gig. We rode a loop of Lake Moultrie in South Carolina, and meandered home after a big meal. Maggie often posted the hashtag, “will travel for gravel” on her Instagram stories. It was hard to keep her away from any dirt road event that she could find. 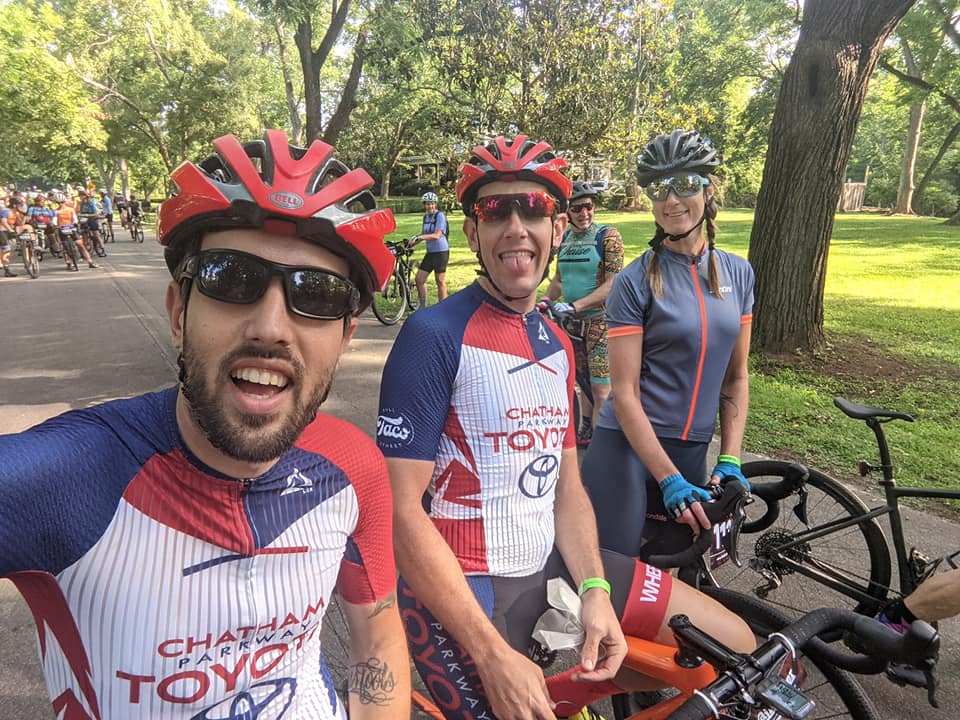 I joked that the three of us were a gravel tricycle.

I got home from my lunch ride a little bit later than normal on Tuesday, April 12th. As was typical, when I got back from my ride, I sat back down at my desk for a few minutes still in my bike clothes and began to catch up on emails. I checked the work social media and saw that someone had posted a link about a bicyclist who had been hit by a car in our local cycling Facebook group. The last line jumped out at me.

“Officials say the bicyclist has been taken to the hospital but are not sure of her condition.”

I texted Maggie immediately. When she didn’t answer, I called Jackson. He told me that he was sitting in the waiting room at the ER. I kicked something in my living room—I don’t remember what, but it was hard—and began pacing around our house. I had never felt so helpless.

Eventually, I got dressed and got in my car and drove to the scene of the collision: Highway 80, near the intersection with Johnny Mercer Blvd. Not far from the grassy field where I first teased Jackson for having a flip phone in 2017.

Yellow flags scattered around the site caught my eye. And then I saw a Cannondale Synapse laying just off of the shoulder in the grass. And then a shoe. Glasses. A helmet. Everything was still just sitting there.

I drove to the Bike Walk Savannah office downtown. Caila Brown, the Executive Director, called the Chatham County Police Department. They released the items to be collected as the collision investigation had already concluded on site. We called Jackson, spoke with his lawyer, and returned to collect the items. 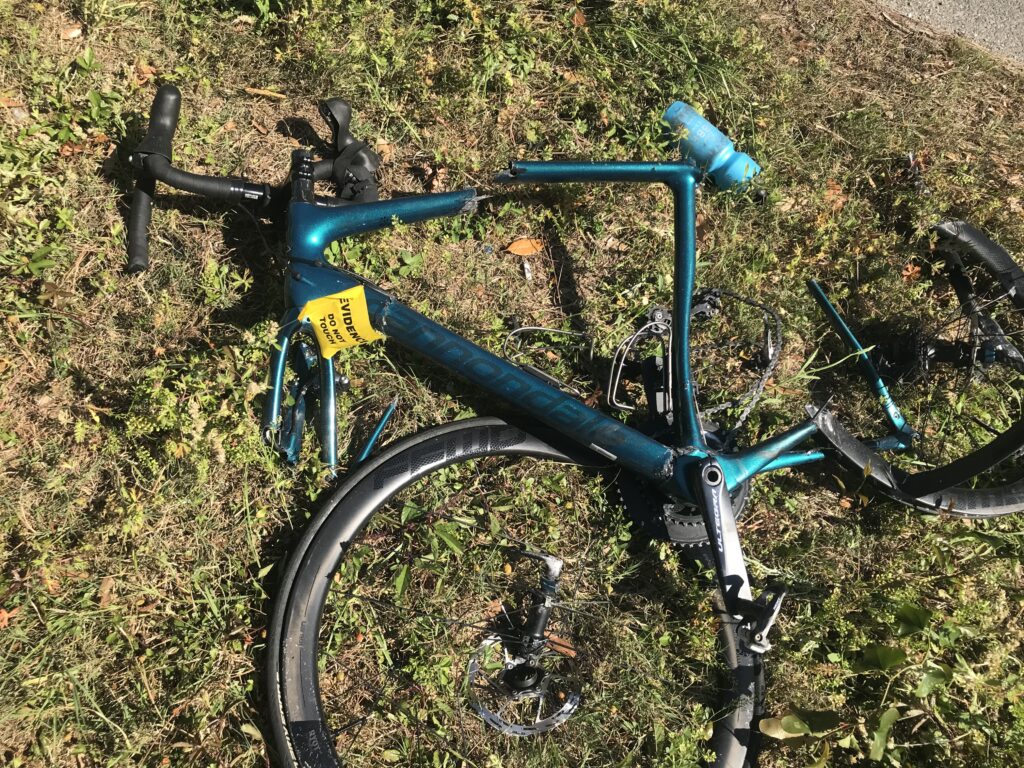 Scattered amongst the grass, the roadside litter, and the shattered bits of pickup truck headlights were my friend’s belongings. I bounced between feelings of anger, sadness, and fear as I picked up her phone and her emergency flat kit.

Maggie is currently stable in the hospital, but has a long road to recovery. Jackson was lucky that he was able to find her in the ER, but it wasn’t without effort.

I personally rarely ride with my wallet. I’m too afraid of losing it, ironically, if I crash. I have a crash notification on my bike computer and have my wife listed as my emergency contact on my phone. I always assumed that, if I crashed, it would be easy to identify me that way.

Maggie’s phone was lost at the scene (and later recovered by Caila and me) but it wasn’t functional. Her cycling computer was not recovered.

I ordered a new identification tag today to wear while I ride so that I can be identified in the case of a collision or crash. Luckily, this also includes information like my blood type and any known allergies. A precaution that makes my family a bit more comfortable. There’s a popular brand of ID tags available for active folks that offers an interactive database online that you can update to change contact information, medical history, and allergies without replacing the physical tag. Smaller, more independent makers and brands can also be found on websites like Etsy. 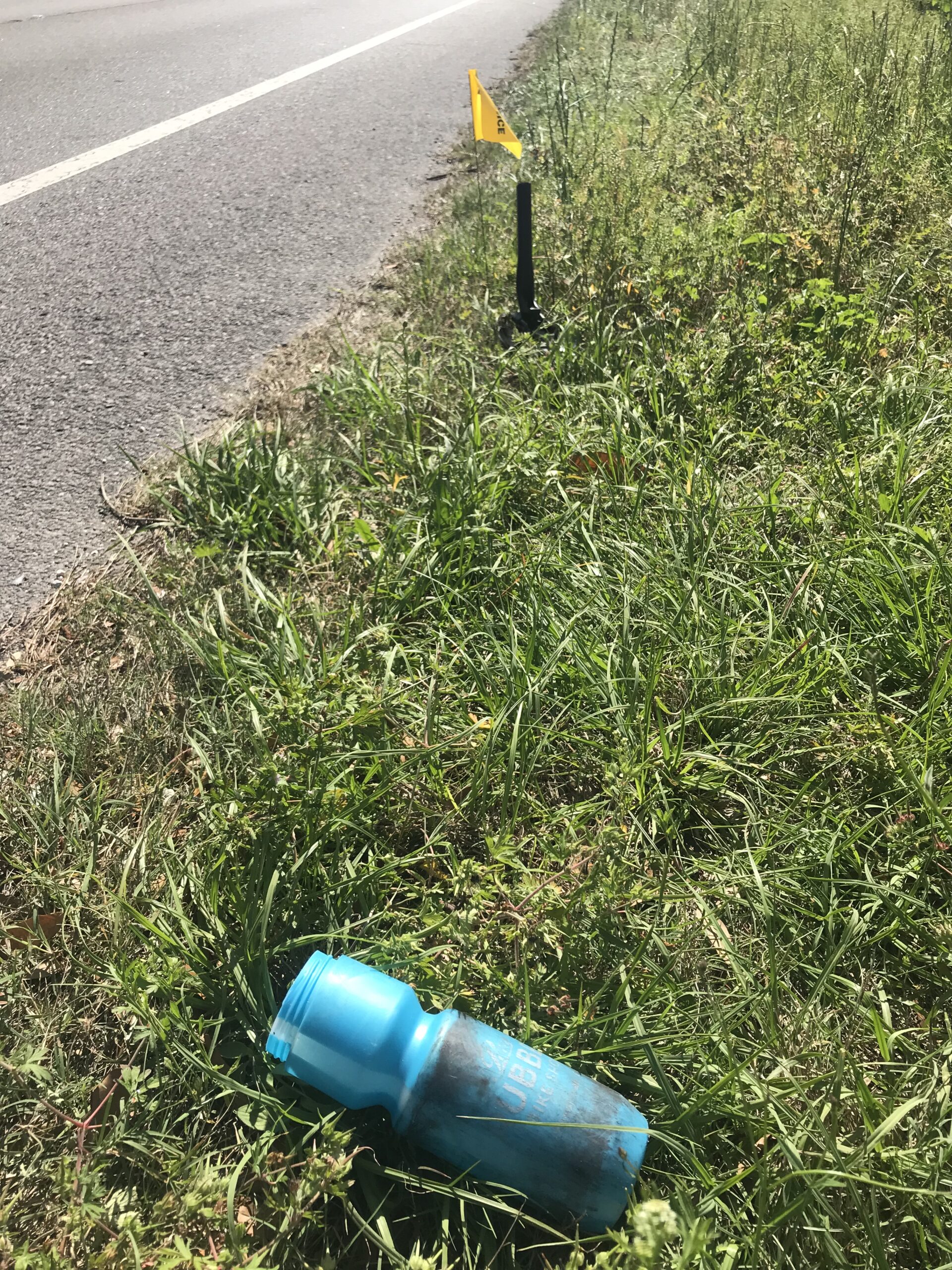 Of course, for a collision like this to happen, something has gone horribly wrong. Highway 80 may not be as safe as a cycle lane in Amsterdam, but there are certainly worse places to ride. On a clear, sunny day like it was, this four-lane road with a shoulder should be shared easily by all road users.

While I can’t speak to charges or decisions made by the police, it seems to me that there was a violation made during this attempted pass. The updated passing law in Georgia (§ 40-6-56, effective July 1, 2021) mandates that motorists change lanes if feasible (there are two lanes of westbound traffic available on Highway 80) or slow down at least 10 miles per hour, and “proceed around the bicycle with at least three feet between such vehicle and the  bicycle at all times.” This strengthened our previous three-foot passing law in that it requires a three-foot buffer and encourages changing lanes completely when possible.

Consulting with legal counsel is always advised in the event of a crash, but with health being our first priority, it can sometimes be easy to overlook legal concerns. An experienced and knowledgeable counsel will be able to fill in gaps and make sure that all of the boxes are being ticked, especially if a police investigation is ongoing, leaving you and your family able to focus on healing and recovery (both physically and emotionally).

It’s important to know how to react and what to do in the event of a crash (Georgia Bikes has resources available on our website). Of course, riding predictably and visibly is the best that we can do to prevent a collision. It was a clear, sunny morning the day that Maggie was hit but she was still riding with a red rear light for increased visibility. Even when we take every precaution to be safe out on the road, we are still at the mercy of other road users. That is why the most important thing, especially when we operate a motor vehicle, is to be attentive at all times. A large pickup truck could weigh nearly 6,000 lbs., but even the smallest car traveling at speed could easily cause serious injury or death to a person on a bike. Every road user should take proper care to be aware of their responsibilities on the road, and work to remain vigilant of those more vulnerable road users out there.