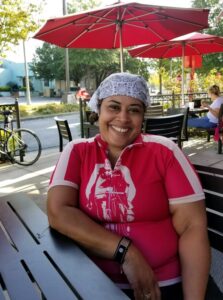 Born and raised in London, England Michelle was an avid cyclist as a teenager. She moved to Atlanta in 1991 after finishing college. Michelle met her husband in 2008 and he had a desire to have his own bike shop. She came from a corporate background, and therefore had the ability to help put his plan into action. They opened our first shop in 2010, then moved into Stone Mountain by the end of that year.

Aztec Cycles moved into its present location in September 2011, where it has been ever since. During that time, Michelle has helped grow the business, held bicycle education classes, and formed a women’s cycling group for those women who want to ride casually but still for exercise called L.I.P.S (Ladies Into Pedaling Successfully) In 2018, they opened another shop in the historic West End of Atlanta with their partner Kenneth.

Michelle currently teaches older women how to ride a bicycle who have never ridden before, or who have experienced some sort of trauma riding as a child. She enjoys seeing the wonder on their faces when they can finally ride a bike on their own. She also handles all the finances for both businesses. We are still growing, which is very exciting!