Georgia Bikes Board of Directors thanks Elliott Caldwell for his service 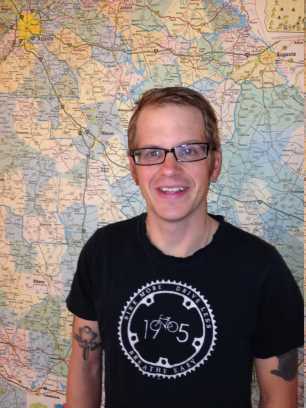 The Georgia Bikes Board of Directors wishes to thank Elliott Caldwell for his service to the organization. Elliott joined the Georgia Bikes staff as complete streets coordinator in 2016 and served as executive director from June 2017 to September 2021. Elliott has returned to Washington, D.C. to pursue new opportunities.

“The work Elliott has done to create safer bicycling reaches throughout the state and touches beginning cyclists as well as more experienced,” said Georgia Bikes Board of Directors Chair Cheryl Burnette. “Georgia Bikes is thankful to have had the pleasure and honor of working with Elliott to move our organization and cycling in the state forward. We wish Elliott well as he moves on to the next chapter.”

Elliott worked tirelessly with partner organizations and lawmakers to pass important legislation, including Georgia’s new three-foot passing law, which went into effect July 1 of this year. He planned and produced the annual Georgia Bike Summit for four years, including the first-ever virtual summit in 2020. Throughout his tenure with Georgia Bikes, he provided support, guidance, and encouragement to bicycle advocacy organizations and individuals from all over the state.

He also undertook the difficult but necessary task of contacting friends and families of fatal crash victims to connect them with support services, while establishing partnerships with government agencies, other nonprofits, businesses, and community organizations to improve safety and access for people who bike, walk, and roll. Elliott was steadfast in his commitment to making the state a better place for all people who ride bikes, and all Georgians — no matter how they travel — have benefited from his work to make our state’s streets and roadways safer for everyone.

Georgia Bikes’ mission is to improve bicycling conditions and promote bicycling throughout the state of Georgia. Founded in 2006, the nonprofit has offices in Athens and Savannah. Support safer and better bicycling by joining or donating to Georgia Bikes today!